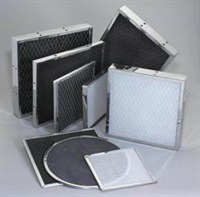 Electrostatic air filters have been proven effective for over three decades.  Initially, they were primarily installed as single units or filter banks in industrial and commercial locations.  The last several years have seen a marked increase as an efficient, cost-effective solution within residential locations.

The electrostatic media air filter is a panel style unit that utilizes a woven synthetic media which has an inherent static (triboelectric) charge, enhanced by air flow.  This charge will not be passed from the air filter to the surrounding equipment or controls.  Static charge is not a current that travels by conduction; by definition, it remains in one place.  Static electricity does not flow like current, and therefore cannot be discharged, even after continuous washing/cleaning.  There is no current or power pack involved.   Even minimal air flow will enhance this characteristic of the media.  The media is usually made of polypropylene or polypropylene thread woven into a waffle type of fabric.

Electrostatic air filters use a combination of charged particle attraction and impingement.  Not all airborne particulates will take a charge.  Air contains a combination of positive, negative and neutral particles.  As charged particles come in contact with the electrostatic media of an air filter, they are attracted to it and attach themselves to its surface, much like iron filings react to a magnet.

The neutral particles can be captured by a filtering action called impingement.  This impingement action can be increased in an electrostatic air filter by the addition of lofted filtering media placed within the electrostatic media panels.  Consideration must be given, however, to air flow through the filter and equipment protection.  In the search for maximum particulate attraction, air flow must not be sacrificed to the degree that it interferes with system function.

Electrostatic air filters offer several advantages that should be considered.  They require no costly, time-consuming system modifications or electrical hookups, so installation is comparatively simple.  They offer ease of handling and a long, useful life.  They require no messy adhesives and are easily combined with other media in unlimited configurations to meet almost any air filter application.

Because of the wide variety of indoor air pollutants, there is no one product or piece of equipment which solves all odor/fumes problems.  Innovative filtering substrates are available to cost-effectively address odor/fume problems.  Configuration options include panels, packs and pleats.

Adsorption is a physical process based on molecular forces.  Finely ground coatings (such as activated carbon or zeolite) have a tremendous surface area with millions of pores which form an internal structure of interconnected passages.  Contaminating molecules are attracted and held on the internal surfaces of these passages.  The molecular binding rate or adsorption rate is directly related to the surface area available and the size and shape of the contaminating molecules.  Therefore, the more finely ground coatings offer increased surface are for adsorption.  The process of adsorption does not mask odors, but actually removes pollutants from the air.

Zeolite, a naturally occurring earth mineral, is found in certain clay soils.  Although not as well known as activated carbon, zeolite has a well documented affinity for adsorbing ammonia by-products.  Zeolite can be used to remove the odors from ammonia based cleaning solutions, urine, uric acid, ethylene gas and so forth.  Recommend applications include hospitals, hotels, salons, households with pets, nursing home various public facilities.

Substrates are available with varying degrees of coating (percent add-on) for very valid reasons.  Each coating has specific affinities for airborne pollutants.  The amount of odor removing compound in a given application or how often it must be replaced is directly related to adsorptive affinity of coating to contaminant molecule, and the level of contaminant in the air.  At the same time, consideration must be given to resistance to air flow that a media will add to an HVAC system.  The optimum combination of air flow and odor removal should be reached by choosing the right substrate/coating combination.

In other words, binding these substrates to media results in dual filtration.  Air passes not only through a filtering media, but through an odor removing compound as well.  It should be noted that, although many variations of substrates/coating exist, the most convenient to work with are those which are chemically or thermally bonded, so very little “brush-off” occurs during handling and use.

One of the most frequently asked questions regarding adsorptive filtration products is how long they last.  The length of the time it takes to reach saturation point depends on on the type and quantity of compounds to be adsorbed, and as well as temperature and humidity levels in the air and the rate of air flow through the media.  In general the greater the variety of compounds, the more difficult it becomes to accurately predict the saturation point.  The best approach to learning what the average life expectancy may be for a particular filter and location is through observation and monitoring.