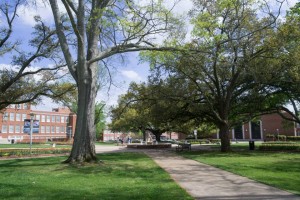 The oldest and one of the top law schools in the United States is in the process of getting a major face lift. The halls of this distinguished school have been walked by many great world leaders including past and current Presidents, Senators, Governors, Supreme Court Justices and Attorney Generals. A portion of the major university renovation includes a new 250,000 square foot legal academic complex situated on top of a four story parking structure designed by architectural genius Robert A.M. Stern. 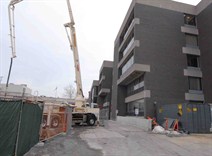 Preparation for the new building construction included moving three historical wood-framed buildings, and a potentially messy demolition of a hall and parking garage. Mass digging with excavators, busy bull dozers and truck traffic coming in and out on a regular basis to remove the excavated materials soon followed. A concrete slurry wall needed to be constructed around the perimeter of the site so that surrounding buildings did not collapse into the large construction hole. Large rocks or boulders were frequently encountered and needed to be broken up, causing noise, vibrations and airborne dirt carried up to 300 feet from the site. Scheduled to take approximately three years to complete, steps were put into place to minimize disruption on the active 20,000 student campus from noise, dust and debris associated with a major construction project. Particular emphasis was placed on the busy classroom building located next to the site that would be the most affected. Special glass was installed in the hall to reduce noise. During demolition, jets of water were arched across the site, directed at the dust that would have choked the scene. Mass excavation needs to be continually ventilated for the workers using high powered fans.

School officials were concerned that the airborne dirt would be sucked into the building’s louvered air intakes that surround the outside of the building just below the windows. These air intakes lead directly to the indoor wall mounted fan coil units used to heat and cool each classroom individually. This type of unit ventilator is designed to economically provide a large amount of outside air ventilation from their enclosure directly into a classroom, hotel or apartment application. Dan Shea, Air Filter Sales, based in Haverhill Massachusetts, suggested installing Permatron’s PreVent® Equipment Protection Filters on the outside to protect the tight, permanent screens that are part of the existing air intake louver system. 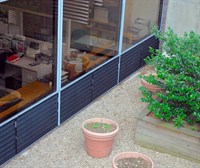 The air filters were installed on the air intakes of the first floor all the way around the building, and the second floor on the side facing the construction of the new building just thirty feet away from the air intakes. This would be the most likely place for the dirt to be drawn into on windy dry days. Permatron custom sized the air filters to the intake perimeters, and also added a layer of metal mesh for support. We then riveted magnetic stripping to the steel frames to hold them in place on the building’s metal louvers.

Screws were used on all four louver corners for a long- term secure fit. The dark black color of the polypropylene filter was one of the features that school officials